In ISO 12233 [1], as slanted edge is used for measuring the Spatial Frequency Response (SFR). When this standard has been developed, this method was know from scanner performance measurement and was adopted for camera measurement. The defined test target has a lot of different structures that can be used for visual inspection and also has slanted edges in horizontal and vertical orientation.

Over the years, it could be shown, that there are some issues in using this target. So the standard is under revision right now and we will see a new standard soon [2].

But the slanted edge method for measuring the SFR will remain (next to the SFR Siemens method) and can be used for a lot of applications. This method is very convenient as it can be applied quickly to a lot of different kinds of edges and the processing can be fast. So for example the Image Engineering production line solutions are based on slanted edges because of this advantages [3].

But one has to be very careful in using this method, as an edge is a very easy “target” for sharpening and other image enhancements algorithms. One has to be aware of the fact, that a camera measurement is in most cases a complete system test. So all different aspects of the camera have their influence on the results. Beginning from the chart and the lighting, the lens and sensor, also the signal processing has its influence. So if you do a measurement, the results can vary very much because of small changes to the system.

One very important aspect is the contrast of the used slanted edge. So from the algorithm side, it does not matter what contrast the edge has. So the contrast in the target should not have a significant influence on the measurement result. But real live is different and you see a significant difference in the SFR if measured on edges with different contrast. 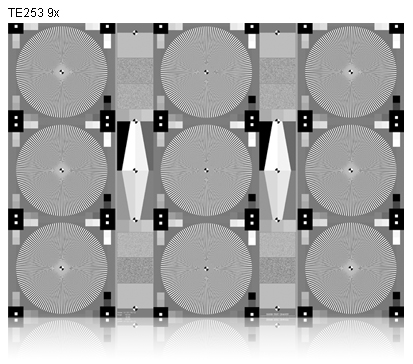 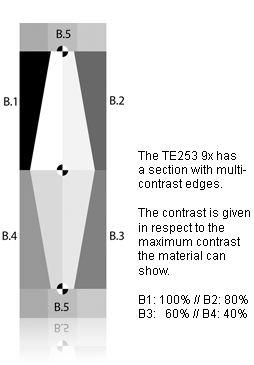 Why are there differences ? With the strong computational power in the digital signal processing unit in modern digital cameras, the filtering and image enhancement is highly non-linear. So a strong, black and white edge in the image is treated differently than a light-gray to dark-gray transition. So the signal processing that was used to enhance the edge is different for these edges, so the SFR result is also different. So the results are not wrong, but they have been created under different conditions and are therefore not easy to compare. So if you want to compare two cameras, you have to make sure that the edges you use have the same contrast. 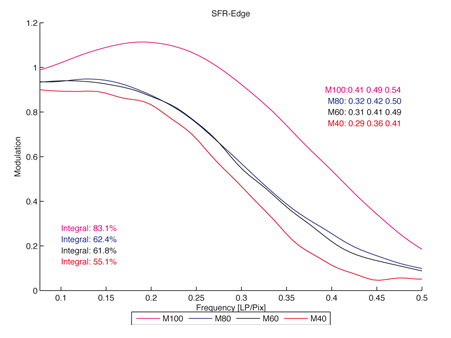 The SFR, measured in the same image based on the different edges (M100 for 100% contrast edge and so on). One can see significant differences. 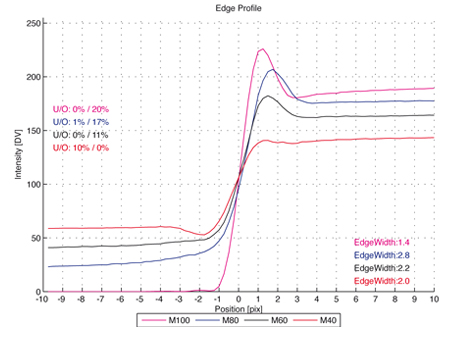 The edge profile that was used to calculate the SFR based on different edges. One can see, that the black level for the 100% edge is already very low, so no undershoot for sharpening is applied. The 40% edge has a very low undershoot or/and overshoot.

We have made some tests and these are available as a paper for the Electronic Imaging Conference. It could be shown, that if the signal processing has no non-linear filtering and no other image enhancement is performed, the results of one camera on different edges (different in contrast) are the same. But if the normal signal processing as used in consumer and professional cameras is applied, the results are different. If the contrast is to high and the bright and dark region of the edge are already close to the maximum and minimum in the data range (0...255), the sharpening is different. And if the contrast is very low (sample with 40%), the sharpening is much lower. So something between 60% and 80% is recommended.

CONCLUSION
•  using a slanted edge for resolution measurement is fast and easy to implement
•  if any kind of image enhancement is applied to the image, one has to be very careful with the results
•  the contrast of the edge has a significant influence on the SFR, so make sure to have a high quality chart
•  the contrast shouldn’t be too high and not too low to get useful results