Nearly all digital cameras use a compression algorithm that is know as “JPEG-Compression”. How does this work?

The algorithm can be separated in different steps. We only show the steps for the compression, the de-compression works in the opposite order. We show only the most common compression: The lossy compression of 8bit RGB data. “Lossy” means, that the compression will also reduce some of the image content (in opposite to lossless compression). 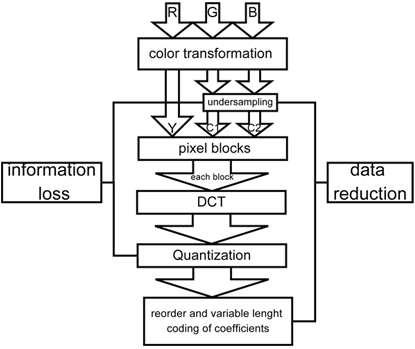 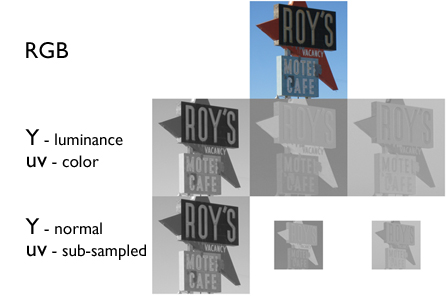 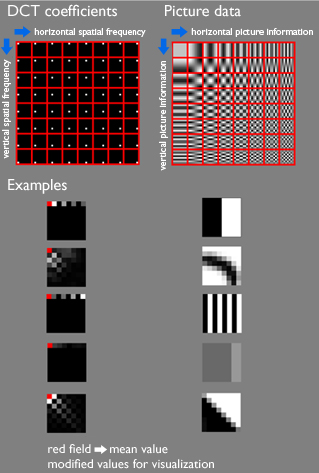 The Yuv image data with the subsampled color components is then divided into 8x8pixel blocks. The complete algorithm is performed from now on on these pixel blocks. Each block is transformed using the discrete Cosines Transformation (DCT). What does this mean? In the spatial domain (so before we have transformed) the data is described via digital value for each pixel. So we represent the image content by a list of pixel number and pixel value. After the transformation, the image content is described by the coefficient of the spatial frequencies for vertical and horizontal orientation. So in the spatial domain, we need to store 64 pixel values. In the frequency domain, we have to store 64 frequency coefficients. No data reduction so far.

To reduce the needed amount of data to store the 64 coefficients, these are quantized. Depending on the size of the quantization steps, more or less information is lost in this step. Most of the times, the user can define the strength of the JPEG compression. The quantization is the step where this user information has influence on the result (remaining image quality and file size). 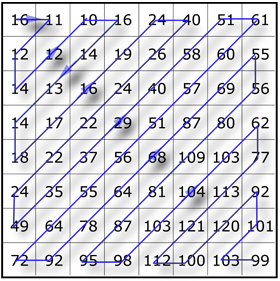 Depending on the quantization, more and more coefficients are reduced to zero. And the probability is very high, that these coefficients with value 0 are found in the higher frequencies rather than in the lower frequencies. So the data is reordered that way, that the values are sorted by the spatial frequency, first the low frequencies, high frequencies come last. After reordering, it is very likely, that we have some values at the beginning and then a lot of 0. Instead of storing “0 0 0 0 0 0 0 0 0 0”, we can easily store “10x 0”. That way, the amount of data is also reduced significantly.