Different kinds of glasses cause refraction or dispersion of various intensities. In photographical lenses the the same effect occurs. So it is neccessary to correct these abberations, otherwise you get to see these effects in the images.

There is LONGITUDINAL CHROMATIC ABERRATION, if a lens cannot focus different colors in the same focal plane. It is caused by straight incident light. The foci of the different colors lie at different points in the longitudinal direction along the optical axis. 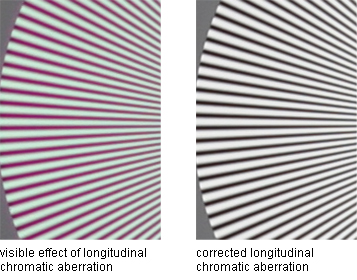 The longitidinal chromatic aberration leads to colored areas in the images, that arise, because not all three colors can be displayed in focus.

Obliquely incident light leads to LATERAL CHROMATIC ABERRATION. In that case all colors are in focus in the same plane, but the foci are not placed along the optical axis.

This kind of aberration does not lead to colored areas, but to fringes that occur around objects of high contrast as the magnification is dependent on the wavelength.

A way to correct the chromatic aberration is to use different lenses in one optical sytem. Different types of glasses refract light in different intensities, so if you combine differing glaastypes, you can reduce aberrations. An example is an achromat, an optical system that combines a refracting and a dispersing lens.

The convex lens refracts the beams of short wavelenghts (blue) stronger than those of long wavelenghts (red) and the concave lens, that comes afterwards, does the opposit: it spreads the red beams stronger than the blue ones. It comes to a compensation of the focus difference and the different light beams meet in one focus.