In order to describe a color of a not self-luminous source it is important to have detailed knowledge of the illuminant used. The International Commission on Illumination CIE (Commission Internationale de l'Éclairage) have defined a number of spectral power distributions, referred to as CIE standard illuminants, to provide reference spectra for colorimetric issues. The illuminants are denoted by a letter or a letter-number combination. Their spectral power distributions (SPD) are normalized to a value of 100 at a wavelength of 560 nm in following figures.

A convenient solution that provides the standard types of illumination and that is large enough to illuminate a whole table top scene is offered by the lightSTUDIO.

CIE Illuminants A, B and C 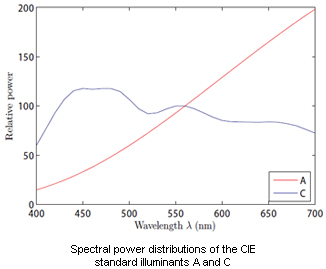 The first three standard illuminants were introduced in 1931. Illuminant A represents an incandescent tungsten filament lamp.

“[CIE standard illuminant A] is intended to represent typical, domestic, tungsten-filament lighting. Its relative spectral power distribution is that of a Planckian radiator at a temperature of approximately 2856 K. CIE standard illuminant A should be used in all applications of colorimetry involving the use of incandescent lighting, unless there are specific reasons for using a different illuminant.” [CIE Standard Illuminants for Colorimetry, 1999]
Illuminants B and C represent direct and shady daylight respectively. They can be derived from illuminant A using liquid conversion filters with high absorbance in the red part of the spectrum.  Due to their deficiency at wavelengths below 400 nm, that are important when e.g. working with fluorescent optical brighteners, illuminants B and C are considered deprecated in favor of the CIE D-series of illuminants. Practical realization of CIE illuminants A, B and C is possible since it is defined in the standard. 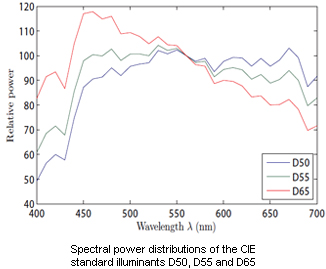 These is a series of illuminants, that has been statistically defined in 1964 upon numerous measurements of real daylight. Although mathematically described, they can hardly be realized artificially. The correlated color temperatures (CCT) of the commonly used illuminants D50, D55 and D65 are slightly different to the values suggested by their names. Due to the revision of an estimate of one of the constant factors in Planck’s law after the standards were defined, the correlated color temperature was shifted a little. For example, the CCT of D50 is 5003K and that of D65 is 6504 K.

“[CIE standard illuminant D65] is intended to represent average daylight and has a correlated colour temperature of approximately 6500 K. CIE standard illuminant D65 should be used in all colorimetric calculations requiring representative daylight, unless there are specific reasons for using a different illuminant. Variations in the relative spectral power distribution of daylight are known to occur, particularly in the ultraviolet spectral region, as a function of season, time of day, and geographic location. However, CIE standard illuminant D65 should be used pending the availability of additional information on these variations.” [CIE Standard Illuminants for Colorimetry, 1999] 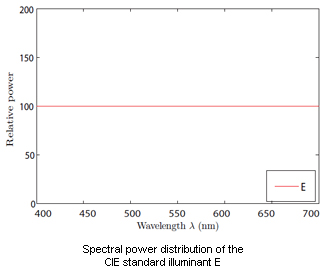 This is a hypothetical reference radiator. All wavelengths in CIE illuminant E are weighted equally with a relative spectral power of 100.0. Since it is not a Planckian radiator, no color temperature is given, however it can be approximated by a CIE D illuminant with a correlated color temperature of 5455 K. Canonical standard illuminant D55 is the closest to match its color temperature. 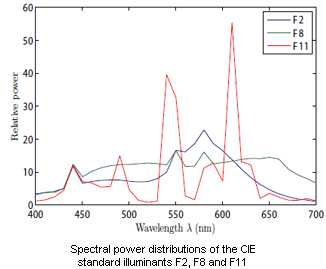 Twelve F illuminants represent typical relative SPDs for different types of fluorescent light sources. Illuminant F2, for instance, describes a cool-white light with the CCT of 4230 K, F8 simulates daylight standard illuminant D50 at 5000K and F11 stands for a triband source with 4000 K. Such triband sources are popular because of their color rendition properties and their light efficiency.