The resolution measurement with sinusoidal Siemens stars is applicable to all digital cameras and done within minutes.

We have been using this method succesfully for years now for several applications like photography, video, automotive, machine vision and others. Actually the method requires only a single image to capture all the necessary data, multiple images can be used to reach a higher level of accuracy. The method provides information about the resolution at different positions in the image, it is stable and leads to reliable results especially concerning sharpening and compression algorithms as sinusoidal structures avoid high contrast and sharp edges.

The test targets containig sinusoidal Siemens stars use only structures which lead to constant measurement results independent of the target position relative to the sensor. 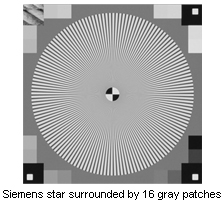 Each star of a test target is surrounded by 16 gray patches, which are used to linearize the image prior to the analysis. A central marc helps to get the focus right and to fine tune the detection of the center. In the corners of each Siemens star are three/four patches (number of patches depends on the test target) with a small white square inside a bigger black square which is used to detect the position of the Siemens star. A detail photograph of a rope serves as a visual indicator. The rope is especially qualified as an indicator for resolution because of its multiple twisted structures turning from fine to broad. Detailed infomation about linearisation you can also find in our TechNote „Linearisation“. 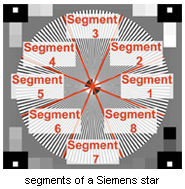 For the analysis each star is divided into eight segments to find out about orientation specific image processing in the camera. Detailed information you can find in the following paper. 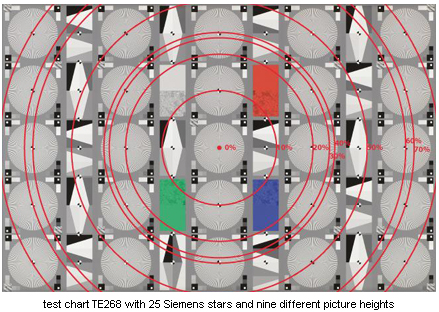 An example test target is the TE268 with 25 Siemens stars spread over the field. In this target nine different picture heights are considered, which enables a very detailed resolution measurement.

Detailed information about our different Siemens test targets you can find here. 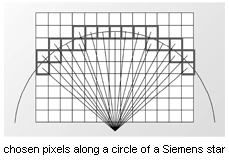 Depending on the software version the Siemens stars are automatically or manually detected using the marks in the corners and the center of each star. Then the OECF of the camera is determined using the 16 gray patches of the central star. The image is linearized using the inverse of the OECF. The star is divided into eight segments. In one segment on one single radius the nearest pixels to that radius are searched and digital value and the angle under which the pixel was found are stored. The mean value of the data of three segments is calculated. So finally data of eight segments is obtained. This provides information on vertical, horizontal and vertical contrast behavior of the cameras. 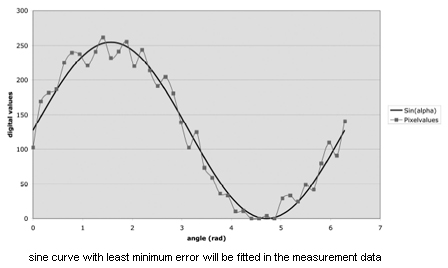 The digital values which are found for the radius are plotted over the angle under which they have been found. The plotted curve looks like a sine curve with some deviations. Then a sine curve with least square error is fitted into the measurement data. Detailed information you can find in the following paper.


Results
The Results of calculation are written to a text file. For each of the eight segments in each of the stars the SFR (Spatial Frequency Response) of the camera is listed as the contrast over the frequency. This data provides a lot of information about the camera system used to capture the image. There are several pssibilities of evaluating the data. 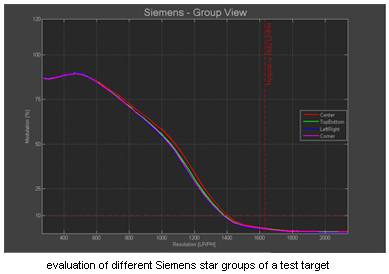